The Nebraska Legislature authorized the Nebraska Library Commission (NLC) to create a depository library program in the early 1970s, and Criss Library joined in 1976.

The NLC distributed copies on microfiche cards, encompassing some 40,000 documents by 2005. The microfiche program ceased in 2005 after electronic distribution was established.

Several times each year, the NLC posts a list of recently acquired documents, and Criss Library uses these lists to identify and catalog Nebraska documents.  The catalog records include links to the online copies, which are hosted by the NLC.

Search Criss Library and beyond

Criss Library catalogs United States and Nebraska government documents just like books or other library materials. Government agencies address such a wide range of interests that almost any search may retrieve records pointing you to relevant government documents. Enter a search as you would for any topic, and then look to the left side of the results screen to find Filters that will refine the results by Author/Creator or Location. For example, a search for geological studies pertinent to Nebraska can be filtered like this: 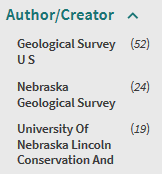 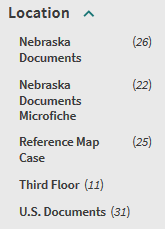 The Federal Depository Library Program (FDLP), administered by the U.S. Government Publishing Office, has distributed documents to libraries since the early 19th century. The rationale for the program rests with an idea proffered by James Madison in a letter written in 1822:

"A popular government without popular information, or means of acquiring it, is but a Prologue to a Farce or a Tragedy, or perhaps both. Knowledge will forever govern ignorance, and a people who mean to be their own Governors must arm themselves with the power which knowledge gives."*

The widespread geographic distribution of government documents provides citizens with information about the workings of their government, and it also helps to insure the survival of documents over long periods of time.

Electronic distribution has proven a great benefit to public access, and Federal depository libraries continue to link people to government documents, whether physically in the library or via the Internet.

govinfo is the official Internet portal of the U.S. Government Publishing Office, designed to provide free public access to official publications from all three branches of the Federal Government. 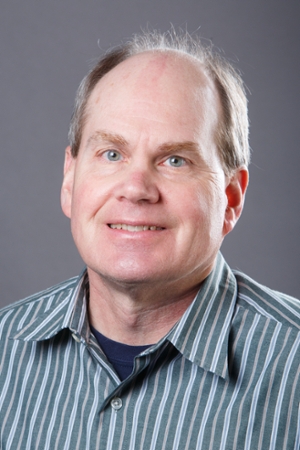