Beginning in 1986, photojournalist Bruce Richardson worked for the United States Information Agency (USIA) as an instructor and conducted photo workshops for the various Afghan news agencies in Peshawar. Literally thousands of photographs were take by him and by his students during the Soviet occupation of Afghanistan. During 1987, 1990, and 1991, Richardson made month-long forays inside Afghanistan to report on the war as a free-lance journalist. His stories and photographs were published in the United States and around the world.

In 1996, the University of Nebraska at Omaha held a photographic exhibition of the Soviet-Afghan War photographs during the annual Global Studies Conference. The event was sponsored by the University Library Friends in cooperation with the Center for Afghanistan Studies and the College of Continuing Studies. Bruce and Shirley Richardson were present during the exhibition. During the past two decades, Mr. Richardson has donated hundreds of photographs and transparencies to the Arthur Paul Afghanistan Collection. Selected photographs from his collection have also been included in the photographic archives of Bibliotheca-Afghanica, in Liestal, Switzerland.

Mr. Richards is the author of many books on Afghanistan, including: 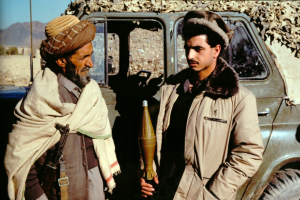